Cast your mind back to December, dear reader, when Ade and I decided to opt for the most eco-friendly of all the Christmas tree options, END_OF_DOCUMENT_TOKEN_TO_BE_REPLACED

Here’s a fabulous way to veg up your Pancake Day!

If you grew pumpkins last year and managed to store them properly, you should still be getting lots of use out of them. We’ve still got two huge Crown Princes left, along with a couple of other smaller varieties, and they’re so handy to have on standby in the kitchen as they work in pretty much everything…. including pancakes!

This recipe was entirely accidental. Ade made a pie for dinner a couple of weeks ago and, as the recipe advised, he brushed the pastry with egg before popping it in the oven. Now egg washes bother me. I mean, they’re completely necessary for a shiny, golden pastry (brushing with milk never quite gets the same results), but you end up using such a small portion of the egg and the rest ends up in the bin. As a thrifty cook, I try not to throw anything away: peelings and veggie tops go in a freezer bag for when I want to make stock; bananas past their best get turned into banana bread; and whenever we have a roast dinner, I simmer the meat carcass overnight to create a bone broth. I hate wasting anything.

Anyway, I managed to retrieve the leftover whisked egg just before Ade banished it to the bin, and popped it in the fridge, intending to scramble it the next day for lunch. But when I saw it on the shelf the following lunchtime, next to a bowl of pureed pumpkin, I began to get ideas.

I ended up making an improvised savoury pumpkin fritter, which was okay, but with Pancake Day on the horizon, a few further experiments saw the recipe evolve into these scrumptious Pumpkin Pancakes! They’re sweet, but not too sweet, and perfect with a drizzling of maple syrup or honey. Soft, wholesome, and packed with a delicious dollop of pumpkin goodness, they’re much more nutritious than your average pancake mix, and topped with fruit, berries and yoghurt, they make for an excellent weekend brunch.

So I’m dashing this recipe out to you early this weekend, so you can give them go!

I often have a bowl of pumpkin puree in the fridge as it’s so handy for spooning into things, from soups and stews to bread and cakes mixes. All you have to do is dice some pumpkin, pop it in a bowl, cover, and microwave for 2-3 minutes. There’s no need to add water as pumpkin has such a high water content, it steams itself. Leave it to stand, covered, in the microwave for a further 5 minutes or so. Repeat the first two steps. Keep repeating until the pumpkin is soft (about 20 mins). Once cooled, mash it well with a fork, pop it into an airtight container and into the fridge where it should last up to a week.

In a separate bowl, whisk together the egg, milk, pumpkin, butter, and vanilla extract.

Add the egg mixture to the dry ingredients and mix well.

Heat a little butter in a pan. Use a small ladle to drop the batter into the hot pan, cooking the pancakes for a minute or so on each side until golden brown. Keep warm on a plate in the oven as you go. 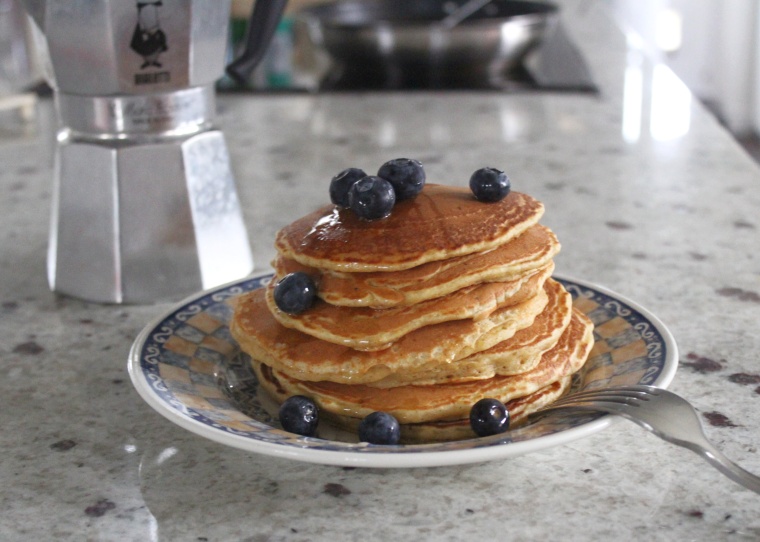 It’s still glut central here at Agents of Field HQ, so I’m grabbing any spare moment to make jams and chutneys for the store cupboard and soups for the freezer, squirrelling away our excess produce for the leaner months ahead. END_OF_DOCUMENT_TOKEN_TO_BE_REPLACED