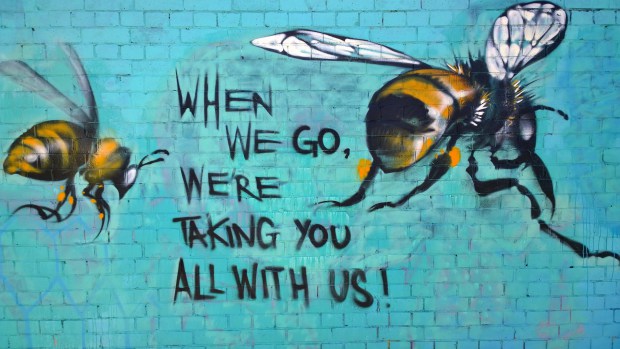 Once more, our friends over at Farm Terrace Allotments have been in the news as they continue fighting to protect their allotment site from redevelopment by Watford Borough Council.

You can see the Sky News item here. Do please share it and tweet about it, as the closure of allotments is something we’re hearing about all too often, and if we don’t fight now, allotments will be relegated to the history books.

Once our precious land is gone, it’s gone forever.

Like most Sundays, this morning I was up bright and early to get to the allotment, do what needed to be done, then get back to the garden to plant out my Cosmos bipinnatus.

At the allotment gate, I always check out the noticeboard to catch-up on the latest news. ‘Charlie from plot 56B is selling courgette seed’. ‘Sue on the plot 101a has found a roaming chicken and wonders if anyone has left their coup open?’ And of course an ad for the ultimate prize, where allotmenteers go head to head in the annual pumpkin-growing competition. Hardly big news in the great scheme of things, but it’s life and it warms me to know people care in this way.

However, this weekend, our garden of Eden, my one place of refuge, was turned on its head. Alongside these notices was a long letter from the allotment supervisor explaining that a few days ago, one of the allotment sheds was broken into and a rotovator was stolen.

These days, we are continually bombarded with horrific stories of terrorism, starvation and corporate greed. As a man who’s been around a bit, it’s fair to say I too, on occasion, have witnessed the darker side of individuals and their unscrupulous behaviour. So on the scale of things, a ransacked shed shouldn’t haven’t hung above me like a grey cloud all morning, but it did, and I began to question why. 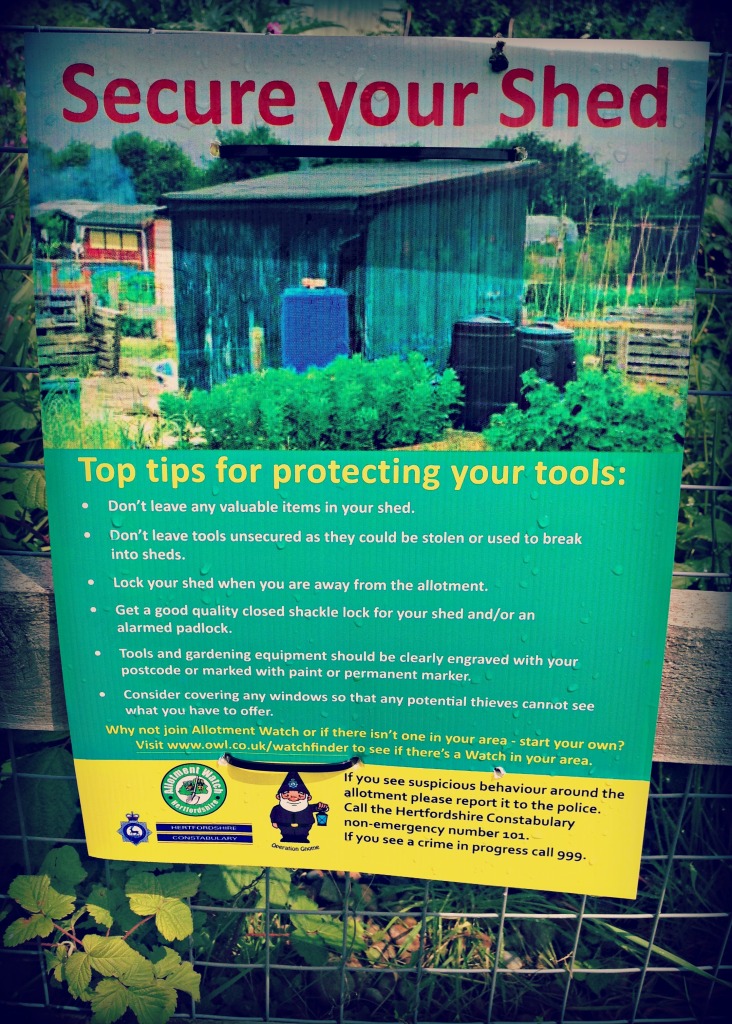 For decades, allotment holders up and down the land have worked hard to create a unique place where they can go, a piece of land to call their own for a minimal cost. Those who can’t afford houses with gardens can come here with their families and grow their own food. Allotment gardening can improve social skills and our relationship with nature. We learn to grow, both on the land and as a person. We know gardening has so many social and health benefits, in recent years the media has high-lighted its positive effects in both therapy and rehabilitation. Gardening is a medicine that costs very little, but has huge rewards. And, as Agent Sophie has written before, in a time of cutbacks and food banks, allotment gardening is such a glaringly obvious solution, yet it’s future hangs precariously in the balance. Whether you’re tilling land in a plot beside a railtrack or sowing seeds on a disused industrial estate, allotments today are facing tough challenges and are awaiting decisions that could have monumental consequences for future generations. From the Save Farm Terrace and the Coombe Allotment campaigns to the crusade to save the Blue Finger land in Bristol (led by Sara Venn), these threats are becoming an ever more frequent blot on our slowly decreasing landscape.

So when I read on a little noticeboard of a minor theft, well, it’s like the allotment is being kicked from all sides. It doesn’t matter how big or how little the theft was, a gardener has been robbed. Again. But, and there’s always a but with me, my glass is half-filled and raised. Why? Because I believe there are good people out there. People who stand-up to these haters and fight the good fight. Whether it’s due to jealousy, insecurity or greed, these people will never find peace or fulfilment, they will always want what they haven’t got.

Believe me, I’m not wearing a cheesecloth shirt and smoking a crack pipe in a meadow somewhere, but I will say this. Look after your fellow gardener, and they’ll do the same by you.

Also, if you have the opportunity, try to get yourself along to Toby Buckland’s Garden Festival at Bowood House this Friday 5th June, where different allotment groups will be getting together for the very first time to discuss the future of allotments.

It’s a big week for allotment gardeners here in the UK. As Sara-Jane Trebar, who spearheaded the fight to Save Farm Terrace allotments (and won), launches a national campaign to help protect the UK’s allotment sites in response to the startling number of allotment closures over the past few years, campaigners in Bristol have taken to the trees in protest over the proposed MetroBus development that will destroy some of the most valuable food-growing land in the country.

Allotments, as we know them, have been part of our cultural heritage since the Victorian age when local authorities were obligated to allocate land to the common people, enabling them to grow their own food. They have remained popular since that time, with numbers peaking at times of national recession, such as during the Dig for Victory campaign and post-war years of the 1940s and the trade union unrest of the 1970s.

How bizarre then that in 2015, while we’re in the midst of a global economic crisis, when 13 million people live below the poverty line in the UK and are struggling to feed themselves, when according to NSALG there are over 90,000 people on waiting lists for allotment plots, when MPs are publicly urging us to grow more food, in short, when our need for allotments has never been greater, our government has been rubber-stamping applications to dispose of allotments for more lucrative ventures.

Between 2007 and 2013, the government received 199 applications to close down allotment sites and it approved 195 of these. During the same period, food banks proliferated at staggering rate all over the country to cope with the national hunger problem, and continue to do so.

We have a massive hunger crisis on our hands, and yes, food banks are a very practical solution to the problem but so are allotments, and unlike food banks, there is a raft of additional advantages that comes with allotments. They are more than just a place to grow food, they are essential to the environmental and social fabric of the community. Allotments encourage physical fitness and mental wellbeing. They provide a sense of community in an increasingly disconnected world. They encourage social inclusion. They provide a vital green lung, improving the air quality of urban spaces. They are a habitat for wildlife. They teach future generations valuable lessons in food cultivation as well as helping foster an understanding of conservation and environmental issues. I could go on.

Oddly enough, in stark contrast to our national hunger problem, we also have a child obesity epidemic in this country. Why? Because kids are eating junk food and not exercising enough. Then there’s also our mental health crisis with one in four of us experiencing a diagnosable mental health problem in any given year. Our government has been forced to launch expensive campaigns to tackle these problems, but studies suggest both of these catastrophes could be prevented at a fraction of the cost if allotments were supported and promoted by our government instead of being destroyed for the sake of more profitable schemes.

The current situation in Bristol is particularly distressing. Having been crowned The European Green Capital of 2015, Bristol is a shining example of a low-carbon city which promotes high environmental standards. To the north of the city lies the precious Blue Finger, a strip of agricultural land which is of such impeccable quality, less than 3% of all the soil in the UK falls into its Grade 1 category. The Blue Finger is home to Stapleton allotments as well as an award-winning community food-growing project called Feed Bristol. Yet Bristol City Council have okayed the development of a new bus route which will wreck the Blue Finger. Yes, this disaster is actually being allowed to happen in Bristol, the European Green Capital, and when the UN has declared 2015 as the International Year of Soils.

Allotment-holder and founder of Edible Bristol, Sara Venn, claims the new route will still bypass large parts of the city, so won’t actually benefit the majority of commuters and Belinda Faulkes of the Rising Up campaign has described the development as “ill-thought out vandalism”. No wonder protesters are braving freezing conditions to camp in the trees that are due for the chop any day now. You can sign the petition here.

I understand that a mushrooming population necessitates additional housing and extended transport networks, but it does feel like this government regards allotment land as completely disposable in this respect; the default solution to any development proposal, and this is wrong. Furthermore, in the cases of both Farm Terrace and the Blue Finger disputes, the councils were reluctant to enter into a fair discussion with the plot holders and instead steamrollered through their proposals, and this shouldn’t be allowed to happen.

In many cases, there are alternative sites which may be more suitable for development (although perhaps less profitable) and these options should be openly discussed. This article published in the Watford Observer just over a year ago, at a time when Watford Borough Council were eager to press through plans to build flats on the Farm Terrace allotments, revealed other vacant sites in Watford which may have been equally viable for housing development and which, outrageously, were (maybe still are) costing the tax-payers an arm and a leg in maintenance in the interim. Surely these empty sites should have been ear-marked for re-development over Farm Terrace, an historic allotment and a precious green space in an already congested area of West Watford?

So please, if you don’t want to see allotments consigned to the history books and are against the slow but steady erosion of our green and pleasant land, sign and share this petition in which Sara-Jane calls on the government to review the criteria to deregulate allotments and to tighten it in favour of their protection. If we lose our allotments, we lose a whole lot more besides, and the truth is, we need allotments now more than ever.